Modernization of the reading rooms

The common spaces of the National Library may be treated as a showpiece of the institution, which should be regarded as a modern, friendly, open place, meeting of the expectations of different social groups.

The Library is a meeting and working space for scientists (academic staff and students), writers, librarians, journalists, politicians, social activists and others interested in culture , literature and its history, as well as readers from Poland and abroad, including young people and seniors, people with disabilities and the socially excluded.

During implementation of the project, the reading rooms and common spaces of the Library will be modernized and arranged to allow using the materials from the Library collections in several ways:

One of the objectives of the project is to create a space of relaxation and recreation for different groups of visitors within the facilities of the National Library.

Modernization of reading rooms – work progress (as of November 2019)

The installation of the skylight structure was started in the new general reading room  after the concrete flooring was made. The roofing structure was mounted on steel columns. Ceilings surrounding the skylight are also under construction. 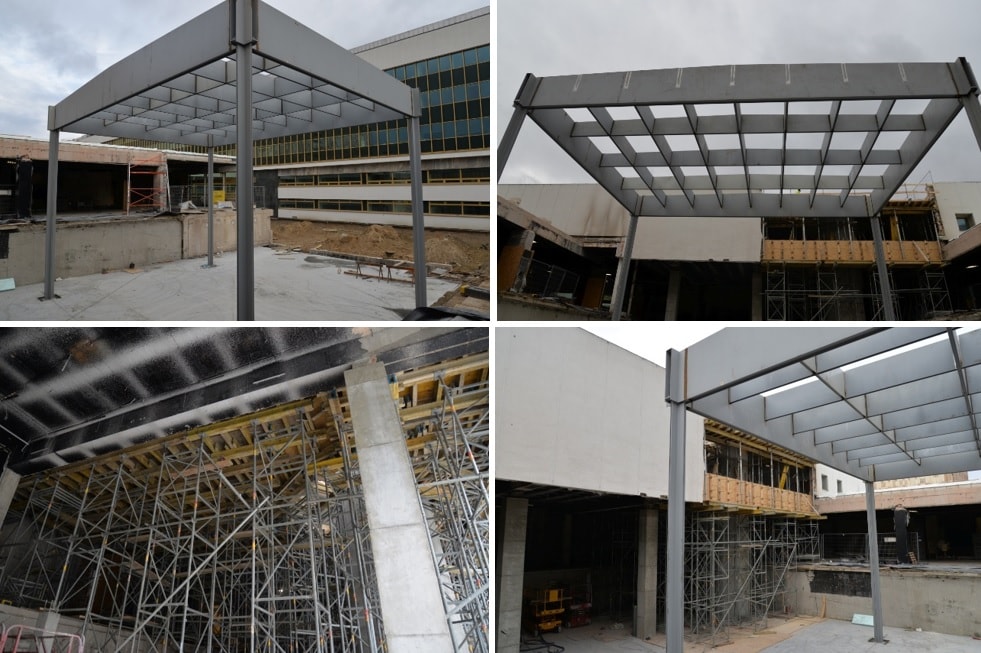 In the technical reading room,  stone wall cladding  cavities resulting from the removal of the mezzanine were supplemented with stone recovered in other places.

Extension of the project implementation deadline

The extension of the Project implementation date was caused by  additional works needed to execute the basic scope of the Project, which became apparent at the execution stage of the said investment due to unforeseable  circumstances.

The dismantling of walls and ceilings in the new open reading room has been completed. Construction of an elevator shaft is in progress, around which stairs will be led. A layer of lean concrete is being laid on the floor.

The first elements of the skylight structure, load-bearing columns on which the skylight roof structure will be based, have been delivered. 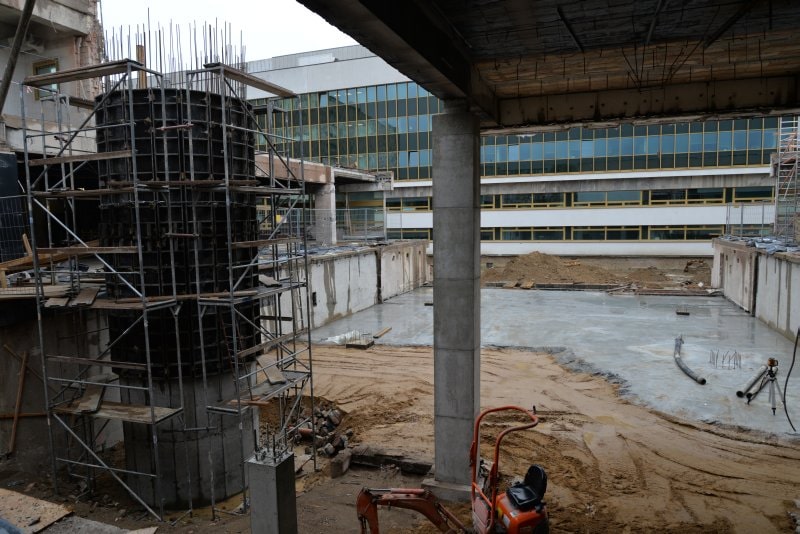 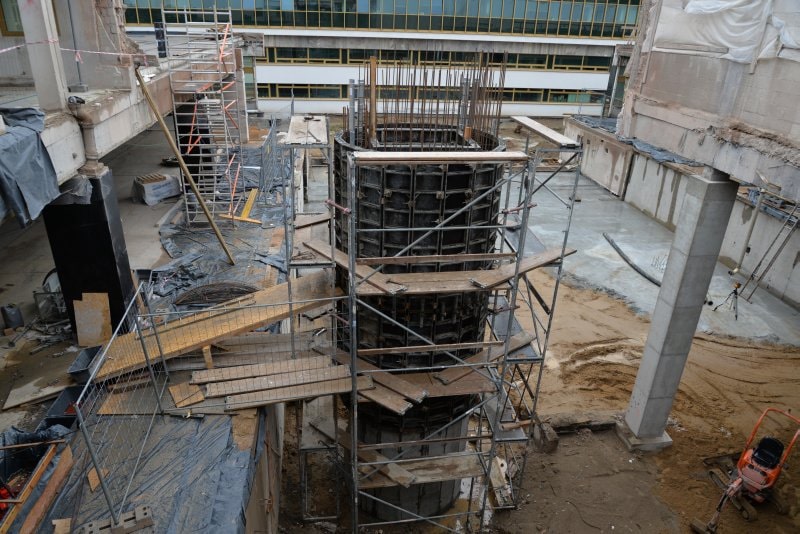 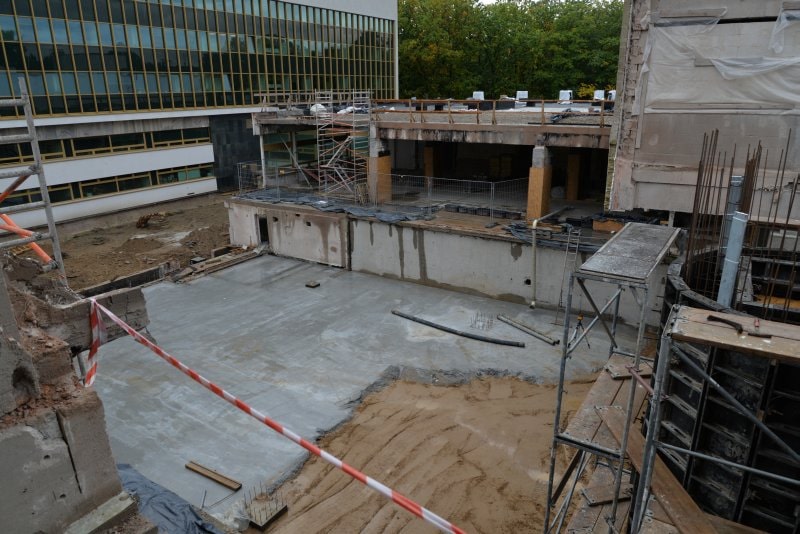 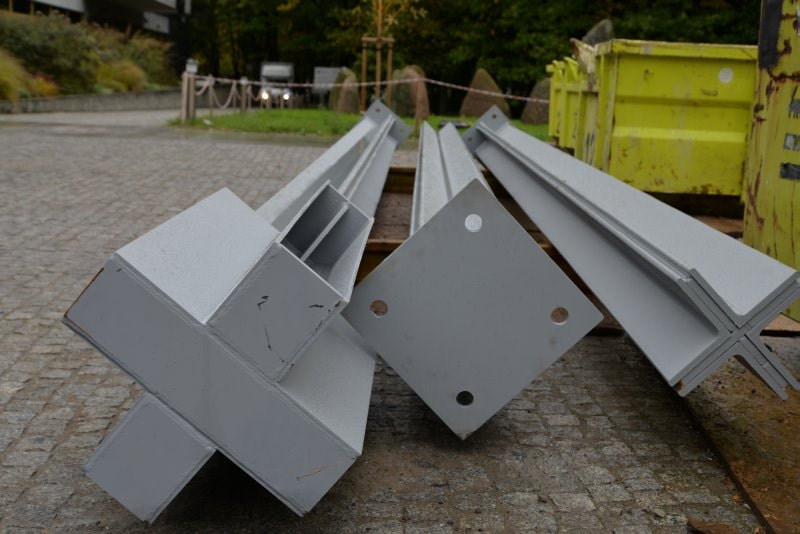 Modernization of reading rooms – progress as of (July/August 2019)

Works on  preparation of the new open general reading room space is under way. The last elements of old walls and foundations are cut out and removed. The structural columns on which the skylight over the reading room will be based have been adequately strengthened, foundations of new structural elements are being created. 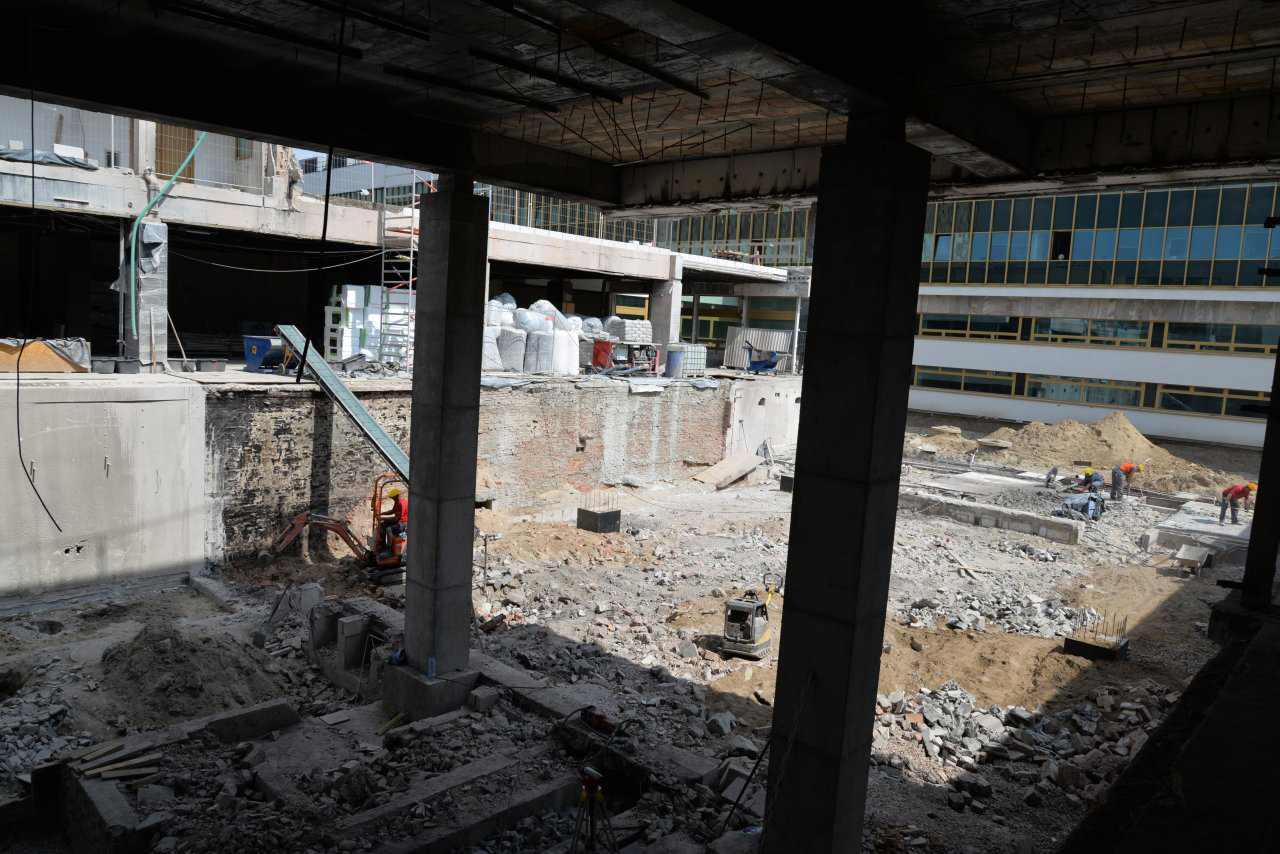 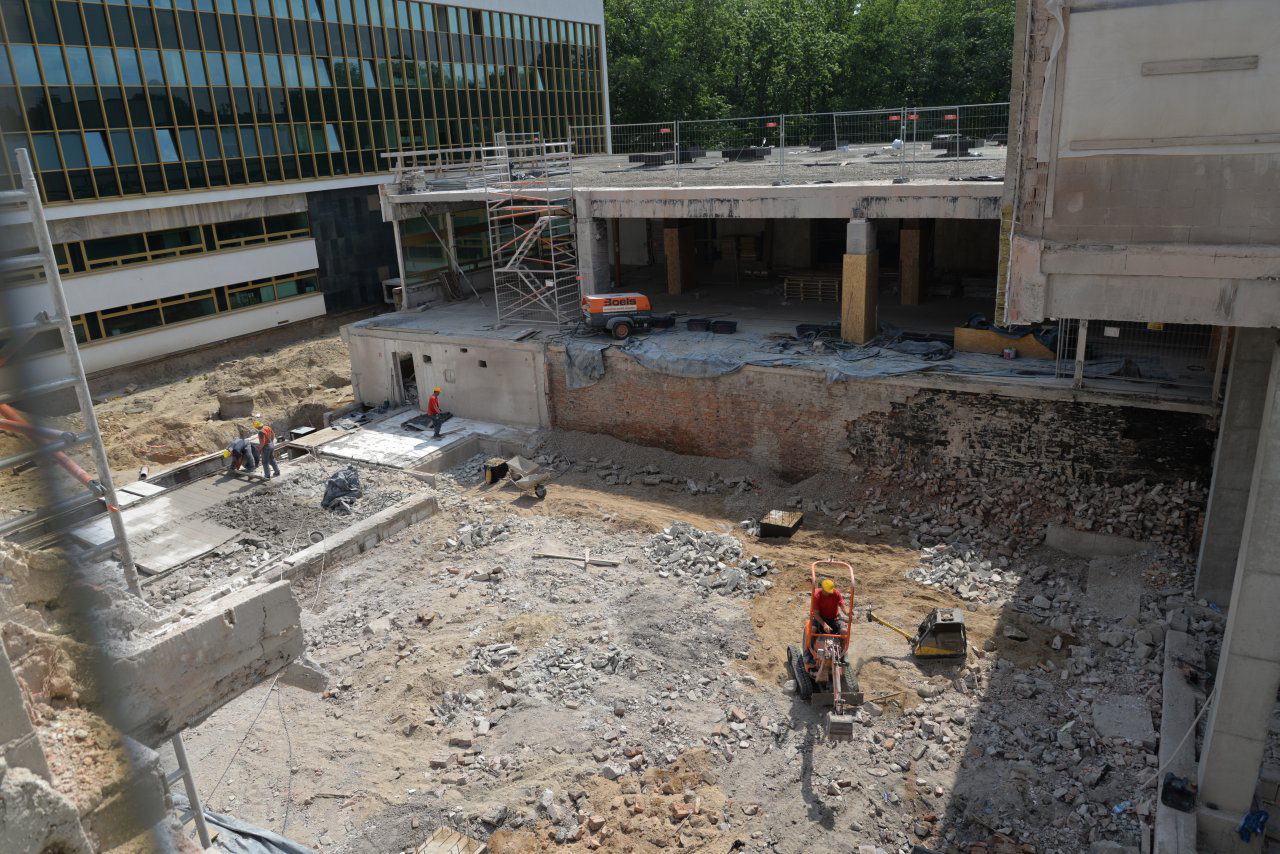 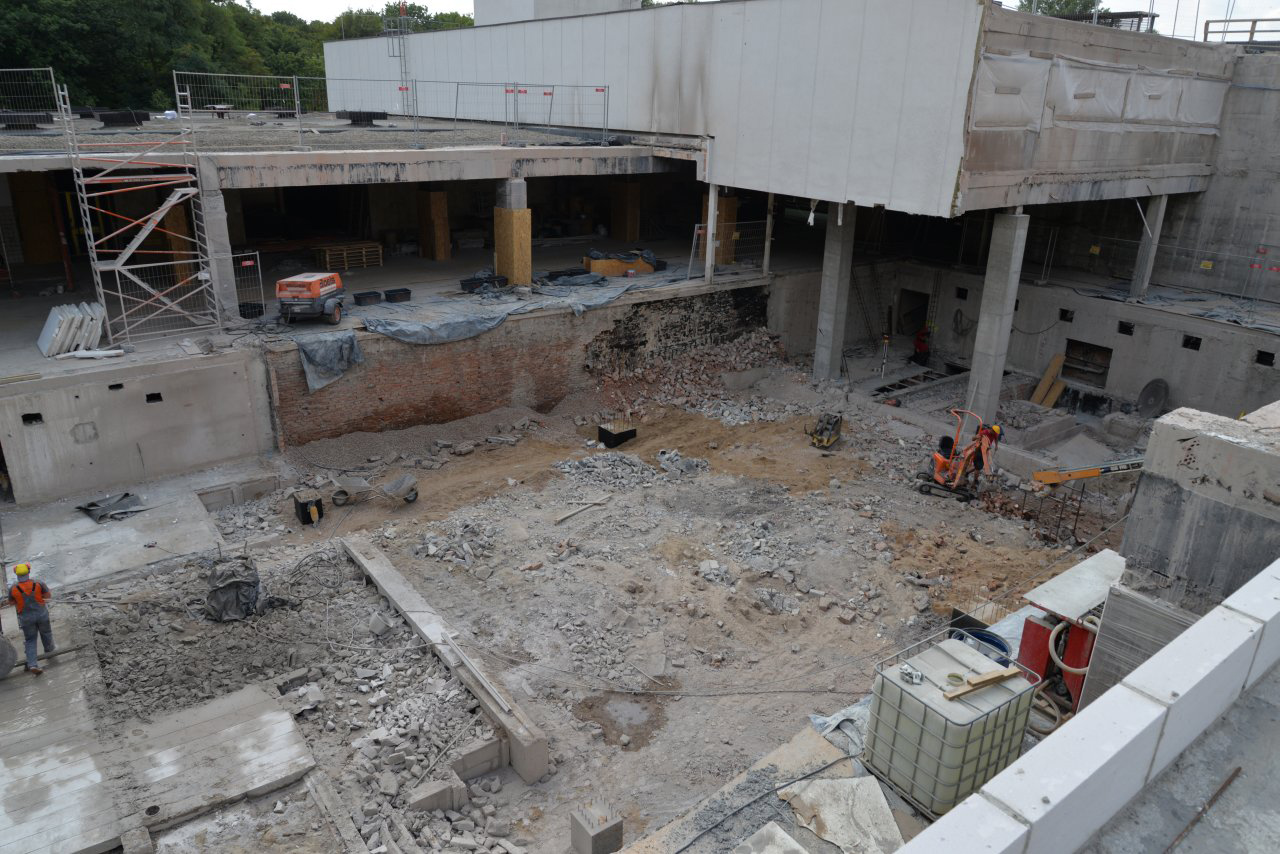 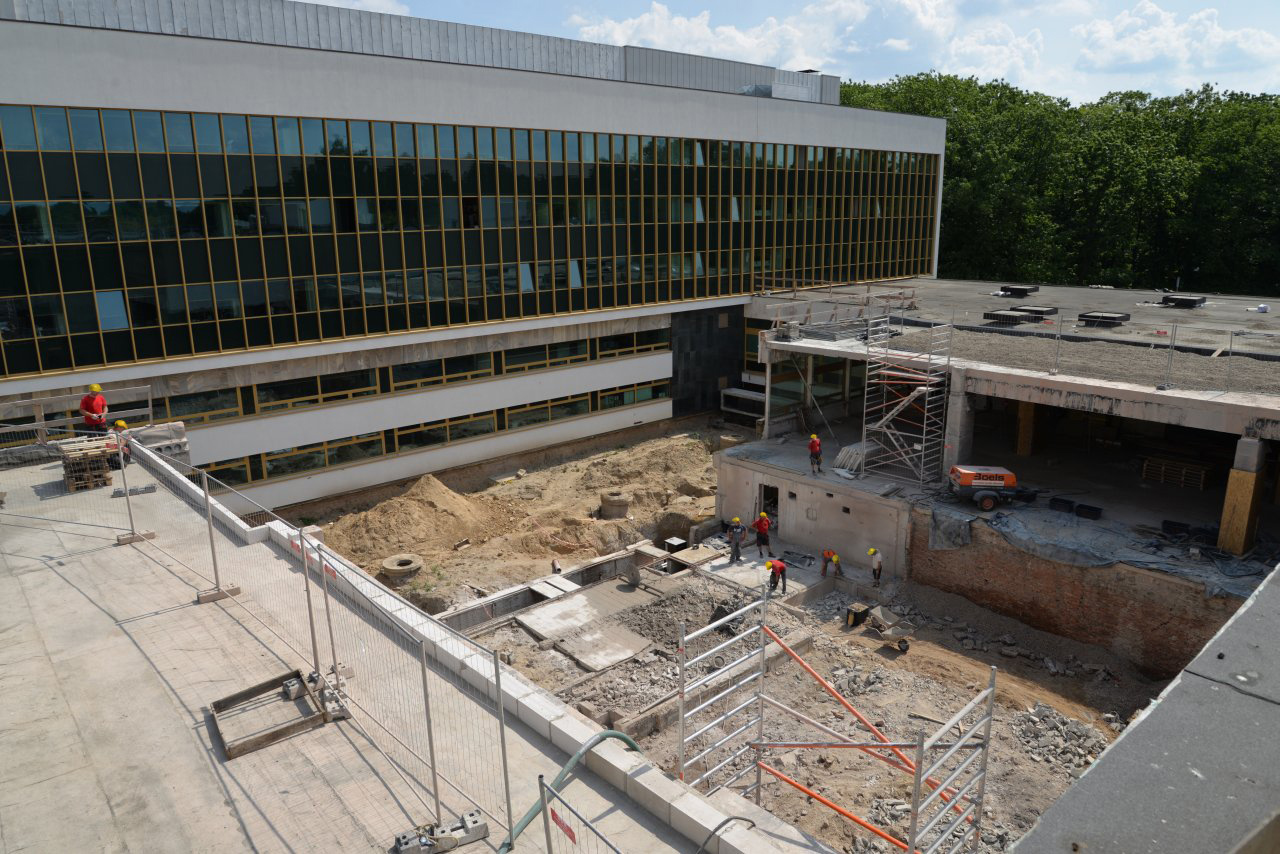 The last three months have been a period of intensive work in the reading rooms. By cutting out a fragment of reinforced concrete walls and ceilings, the space of the new general open reading room was opened up almost completely, it will be partially covered with a skylight. 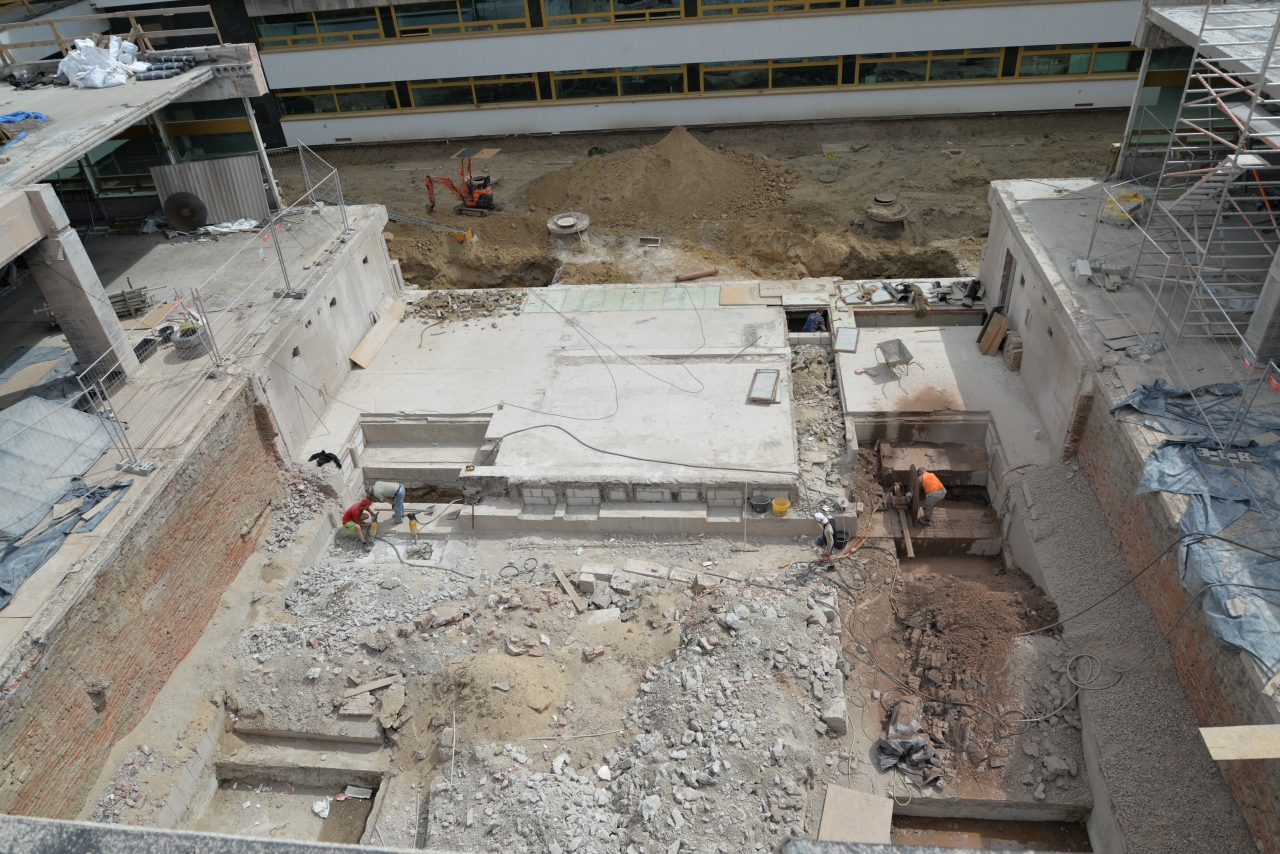 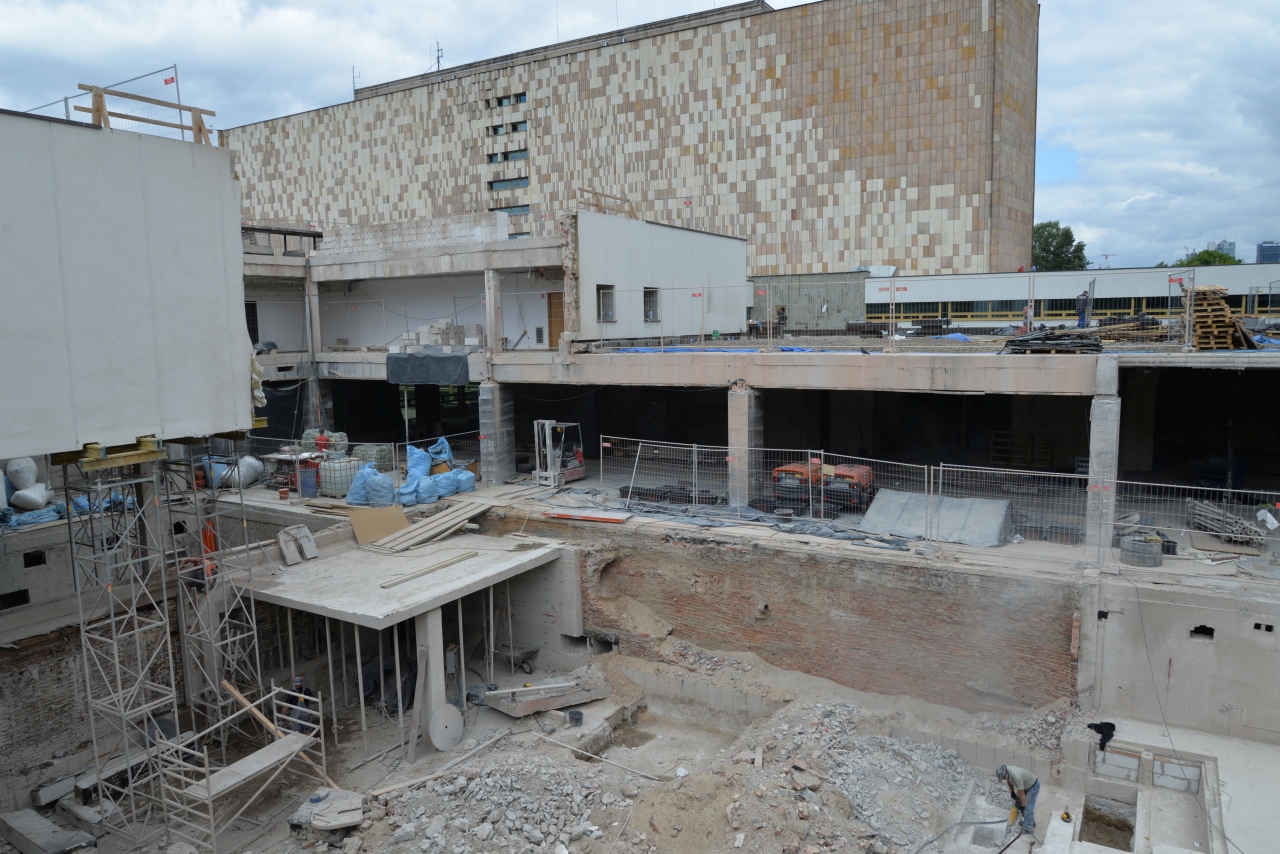 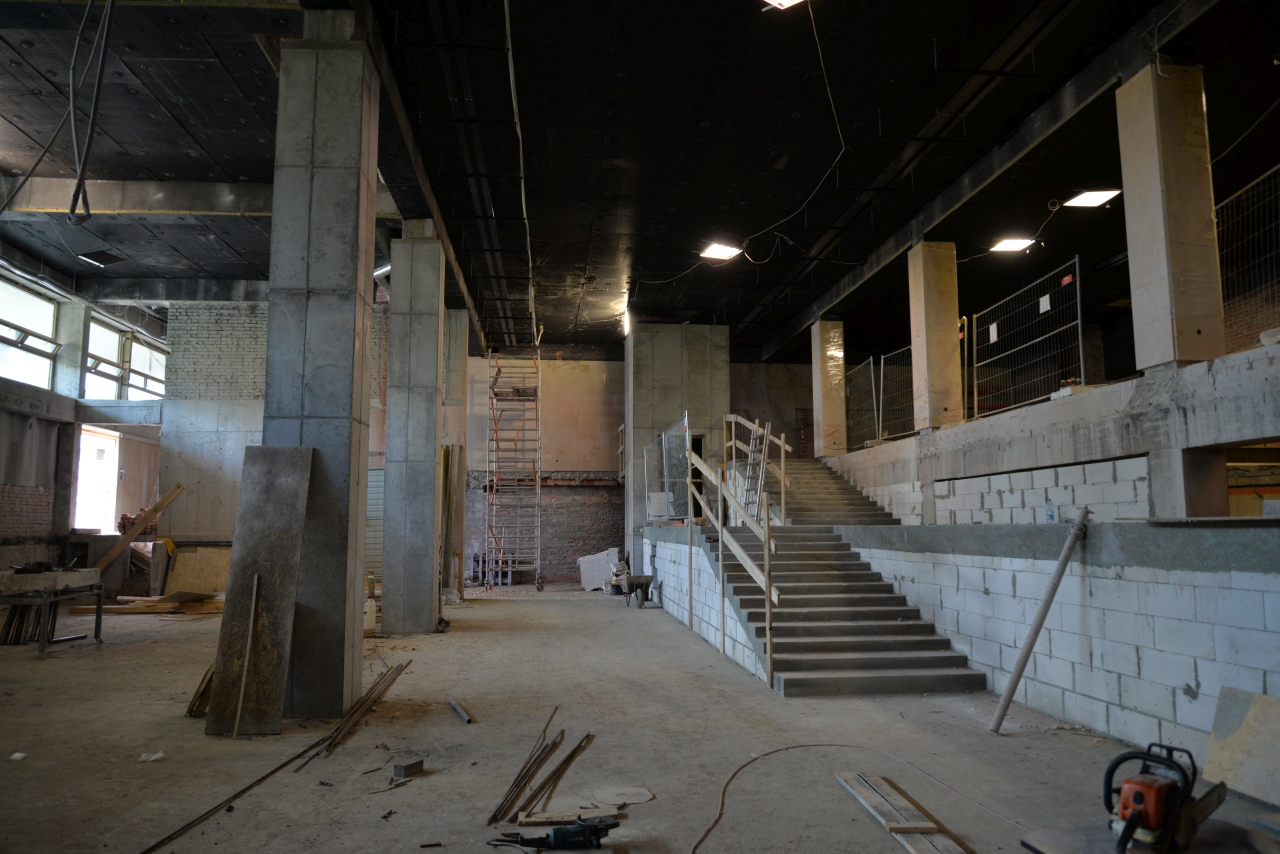 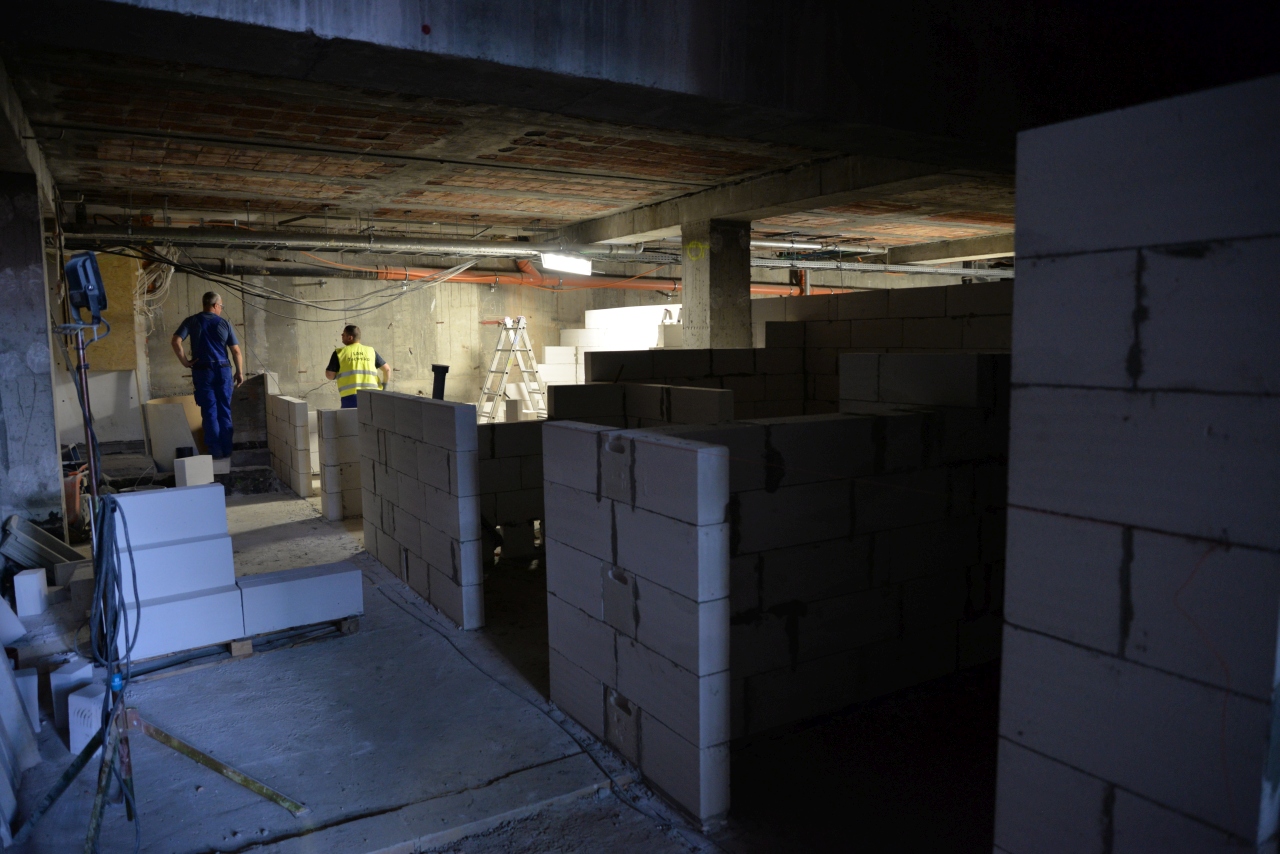 In the general and specialist reading rooms, cable routes are prepared after the acoustic ceiling insulation has been installed. 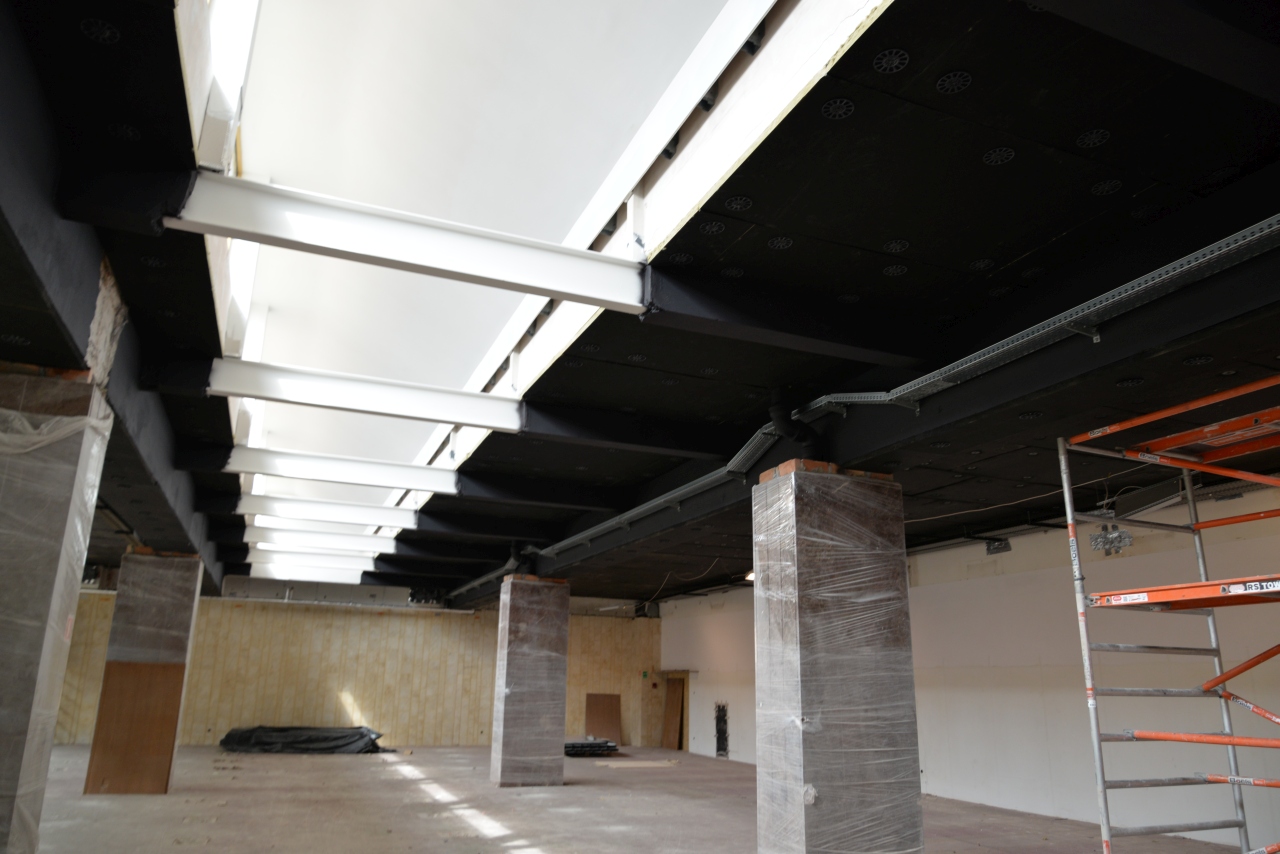 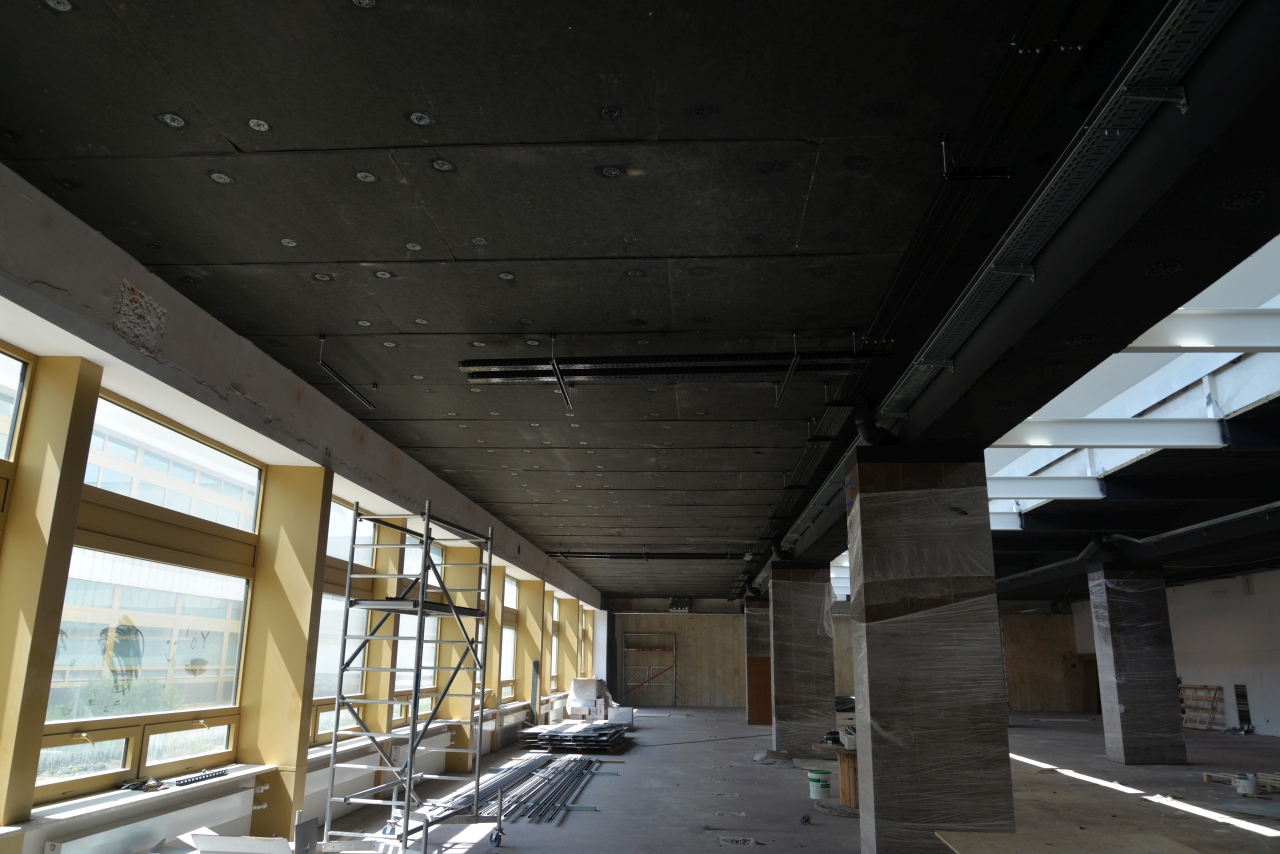 The ground was selected and the patios were cleaned. 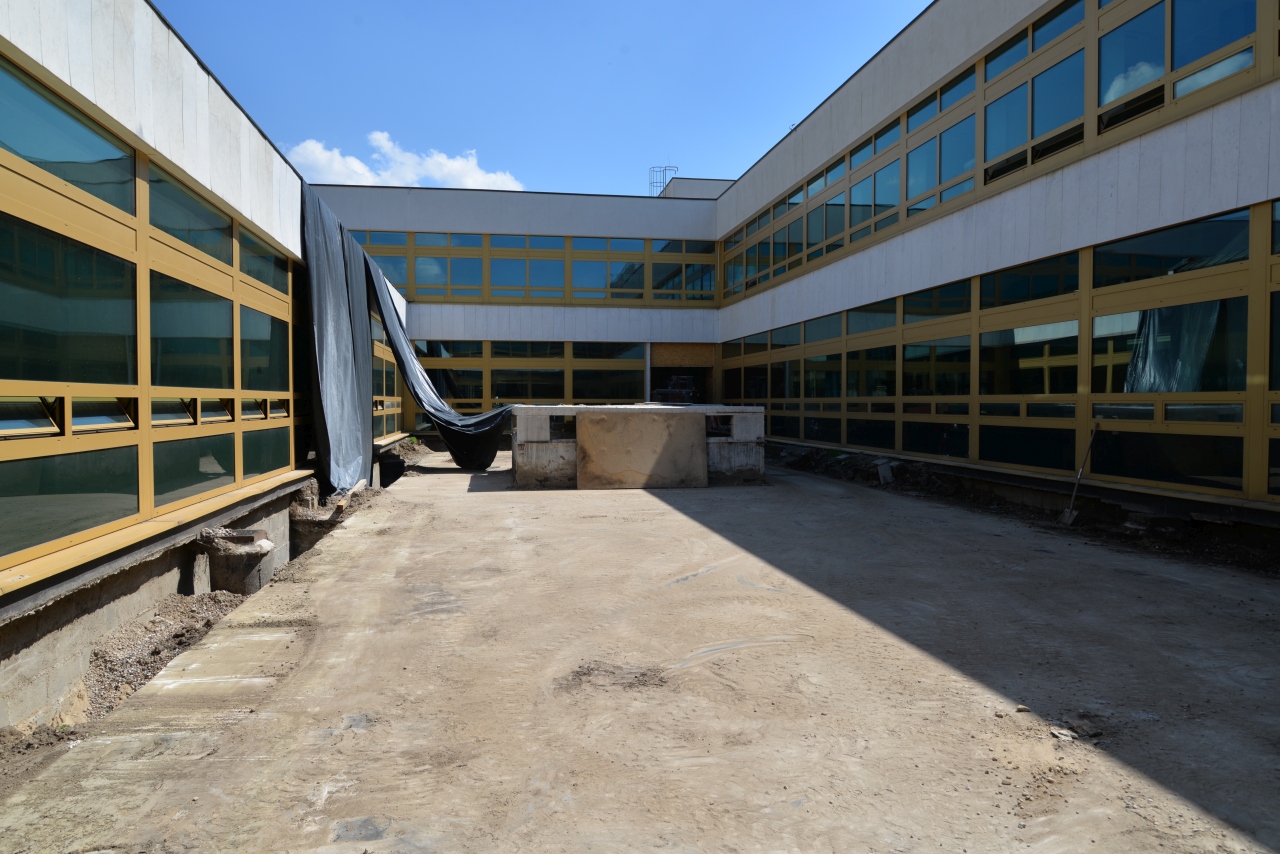 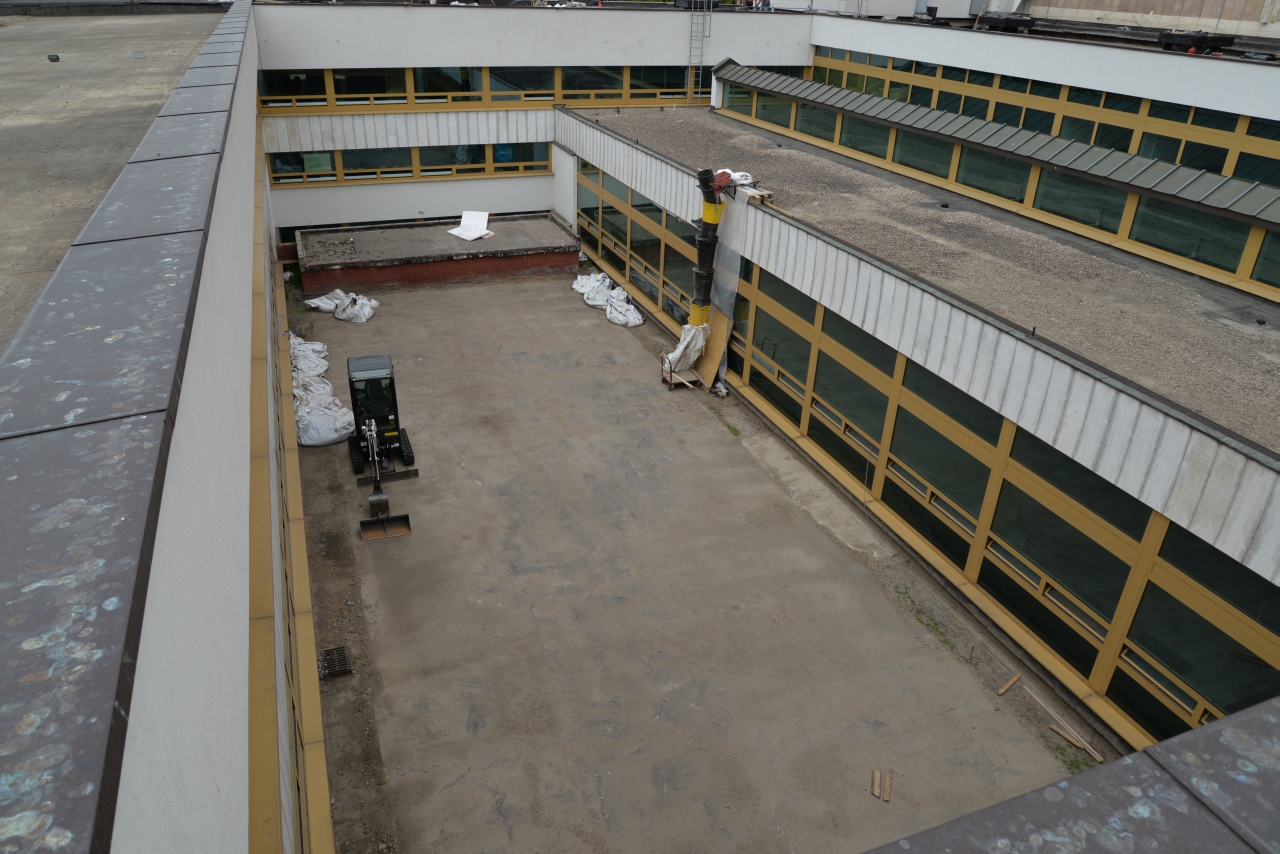 The majority of works related to necessary demolition, disassembly and rebuilding of the installation has already been completed.

The removal of the ground from the patio No. V and the preparation for the construction for the skylight above the new open reading rooms is in progress.

At the same time, the acoustic insulation of ceilings is being installed. In the reading room, the structural beams, which will remain visible,  were uncovered and cleaned.

In the technical reading rooms The load-bearing structure was strengthened and the construction of the lift shaft was started.

Increase of funding of the project

At the request of the National Library, the Ministry of Culture and National Heritage has agreed to increase the eligible costs (above the limit of Euro 5 million) of the project "Modernization of reading and public spaces of the National Library" within the frames of the 8.1 action “Protection of cultural heritage and development of cultural resources” of the Operational Programme Infrastructure and Environment 2014–2020.

Following the contract concluded on 9 of August 2018  for the modernization of the National Library reading rooms, the contracted building company was admitted to the construction site. 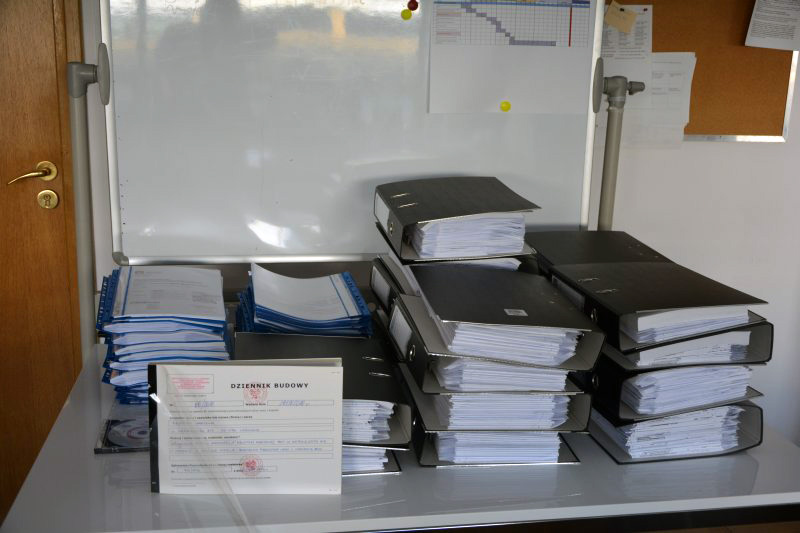 Representatives of the National Library handed over project documentation and construction log to the contractor. 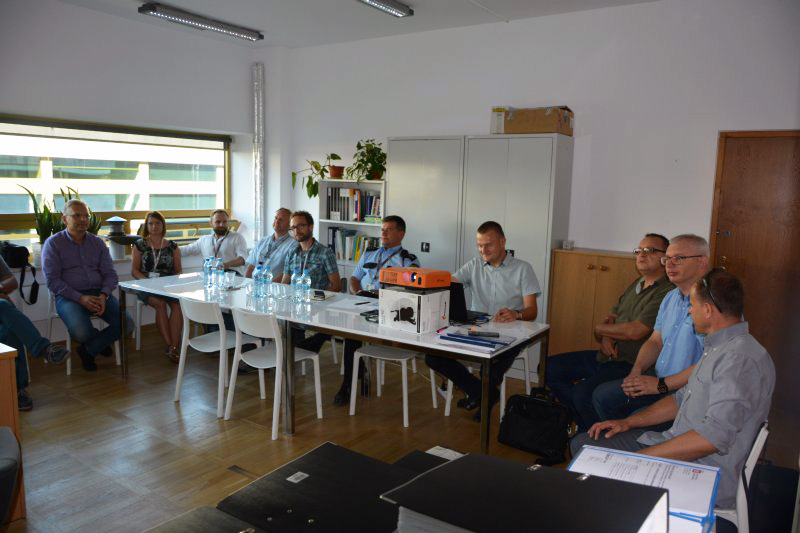 Modernization works will begin soon and we will see the final outcome in approximately two years.

The contract for the modernization of the reading room signed 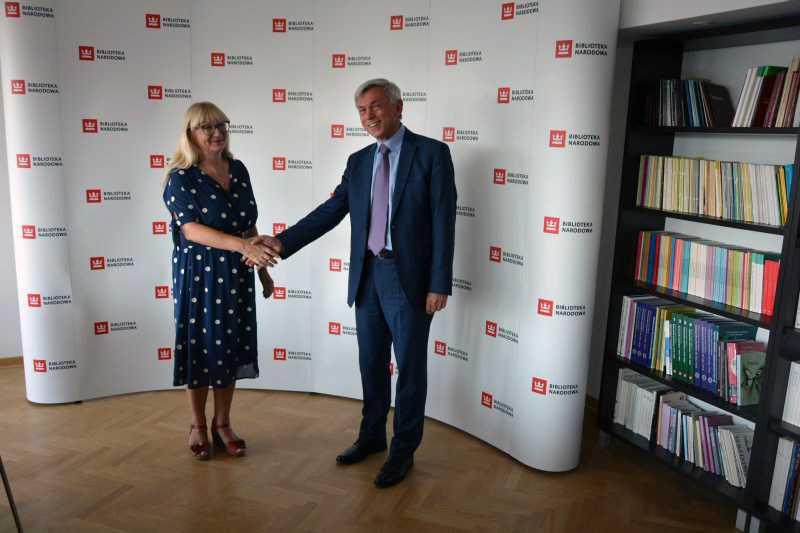 The Warsaw-based company, Prochem S.A., was selected as modernization contractor by tender. 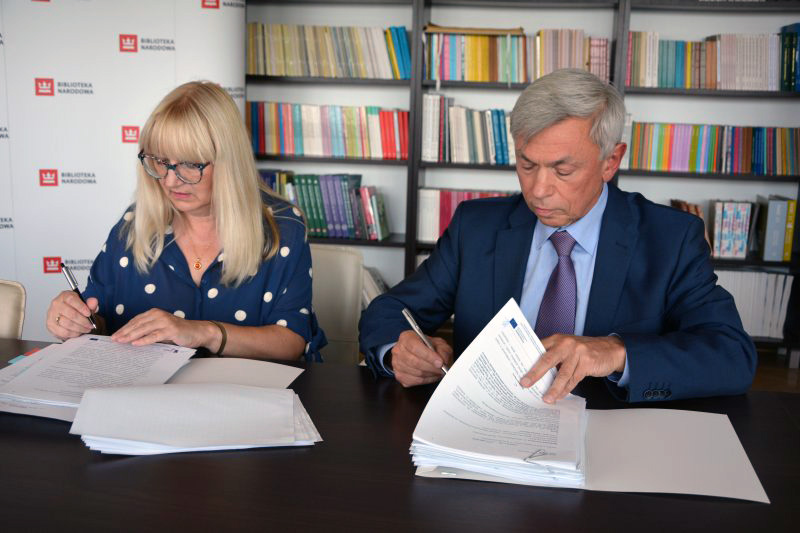 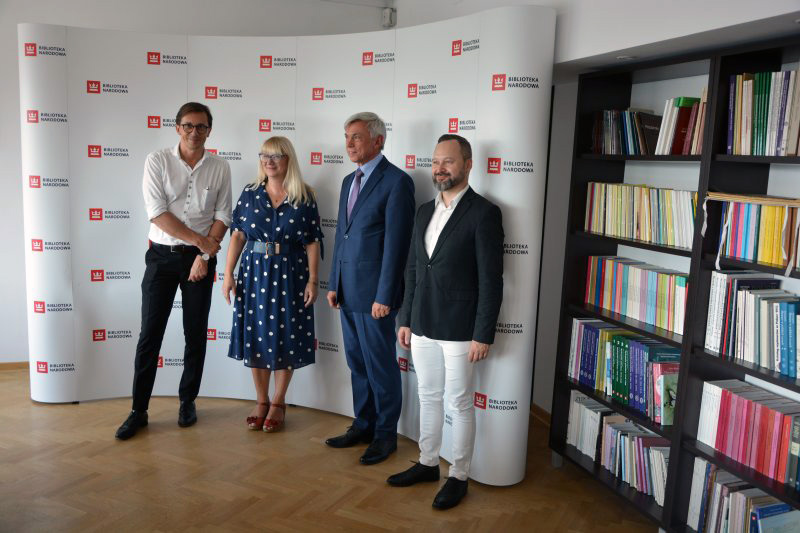 The completion of the works is expected in August 2020.

April 12, 2017 – Conference inaugurating the modernization of public libraries and public spaces of the National Library

On Wednesday 12 April in the National Library held a conference inaugurating the project "Modernization of reading and public spaces of the National Library". The conference was started by the director of the National Library, Dr. Tomasz Makowski, who presented the main objectives of the project and informed the participants of the grant. The financing amounts to a total of PLN 16.2 million and comes from the European Regional Development Fund within the framework of priority axis VIII "Protection of cultural heritage and development of cultural resources" of the Operational Programme Infrastructure and Environment 2014 – 2020 and the state budget. – Our building was originally designed for development, because it is development, with changes in technology and expectations of users, which is included in the mission and objectives of the National Library - said director Tomasz Makowski.
–  At this moment, we are launching the next stage of this development - the modernization of the reading rooms and public spaces - according to the excellent project by the architect Tomasz Konior, who won the competition and thanks to the European funds, which we received by the decision of the Ministry of Culture and National Heritage – stressed the director.

Due to modernization, the National Library is to become a modern and open place and, above all, friendly to the readers. Modernised reading rooms will allow easier access to collections - a spacious, open room with free access to books and smaller, specialized cosy reading rooms. Using the Library will become much simpler thanks to new IT solutions. The National Library is to become not only a place of learning and work, but also a center of culture that encourages meetings, conversation and relaxation. To this end, four patios will now be available to the public, each of which will be treated as a garden of different character.

Details of the architectural design were presented to conference participants by its author, architect Tomasz Konior. – During the process we focused on the assumption that the building of the National Library - keeping all its existing advantages – should become more intuitive - said the architect - to lead the reader to its heart being the information center, registration of readers and providing books. Further, the designer discussed general assumptions about the intuitiveness of moving around the building, ergonomics, the elimination of architectural barriers and the economics of the facility's maintenance (the planned energy modernization is intended to reduce the energy consumption of Library buildings and contribute to the reduction of pollutant emissions). He also presented interior design issues as well as details on lighting, materials and architectural details - the building is not only useful but also visually appealing, so plans are for the use of precious materials such as copper, steel, wood and stone as they will refer to the surroundings. 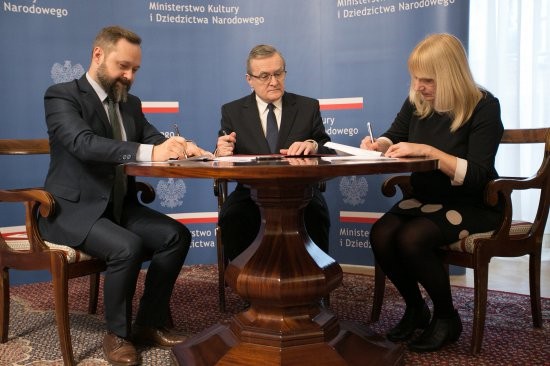 The National Library received the funding of PLN 16.2 million to modernize reading rooms and common spaces in the main building at Pole Mokotowskie. 80% of these funds – PLN 13 million - come from the European Regional Development Fund within the framework of priority axis VIII "Protection of cultural heritage and development of cultural resources" of the Operational Programme Infrastructure and Environment 2014 - 2020. The remaining 20% - PLN 3.2 million - will be granted by the Ministry of Culture and National Heritage from the state budget. On Monday,  6th of March 2017 at the headquarters of the Ministry the ceremonial signing of the subsidy agreement was held.

As a result of the modernization of the National Library reading rooms will be adapted to modern standards. In the renovated main building there will be a variety of spaces in which everyone will find suitable working conditions. There will be a spacious, open room with easy access to books, as well as smaller, specialized study areas. In addition to the reading rooms common public spaces will be modernized, including the coatrooms and rest areas with gardens in patios, each with a different character. The project authors attach great importance not only to the purpose but also to the visual appeal of architecture. The plan is to use precious materials: copper, steel, wood and stone. 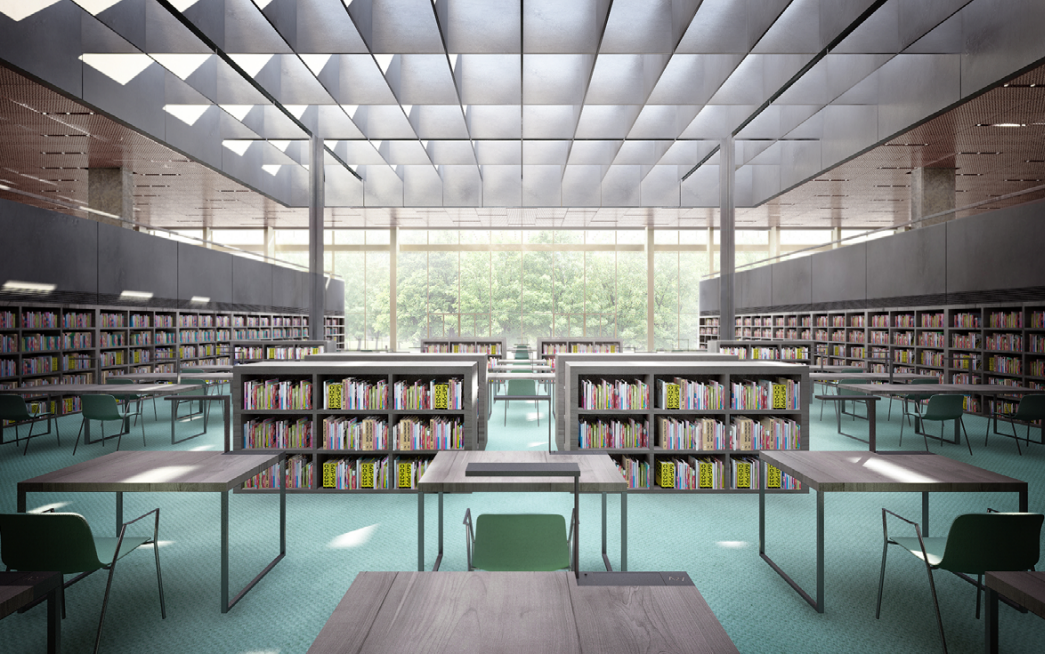 The National Library of Poland is getting prepared for a new project – the modernization of the reading rooms and common spaces. Thanks to getting the subsidy for the project, it will be possible to make the most modern facilities available to the visitors. The access to the library collections will be easier and the common spaces will become more attractive and friendly to the users.

Among the undertakings chosen by the Ministry as the ones that will get the subsidy for the non-monumental type of infrastructure, the project obtained the highest amount of funding.  Thanks to that, the following goals will be achieved:

Another goal of the project is to improve the exposition conditions of the National Library collections, which contain the important elements of the national heritage. These items will become more available to the visitors, including the disabled, helping to prevent the social exclusion and marginalization of people with disabilities.

The newly modernized facilities of the Library will become one of the most important centers of the cultural and educational activity of the region, attractive for the local community as well as for the tourists from Poland and abroad.

The project will be implemented within the frames of the 8.1 action of priority axis VIII: “Protection of cultural heritage and development of cultural resources” of the Operational Programme Infrastructure and Environment 2014–2020.